Admittedly, it was a rather unusual place to hold a networking event but our gracious host made it seem logical for those that chose to come.
On Tuesday, October 19th, the Chamber held its After Hours Networking Event at Waitt Funeral Home on Rt. 79, Morganville
and it was a big hit!
After a buffet dinner was served, Michael Grandi, general manager hosted a very insightful night in which he gave a wonderful presentation about the history of the building and the business before
dividing everyone up into small groups for tours of its facility.  The tour guides provided everyone with a behind-the-scenes look at everything that goes into funeral preparations. It included the arrangement discussion room, casket storage room, the viewing room and more.  Participants even learned about the care given to the deceased in preparing them for their viewing.  It was an unusual night but a fascinating one nonetheless.  Thank you to Michael Grandi and his staff for making the night so memorable. 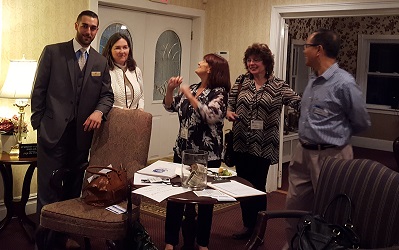 NETWORKING EVENTS
(Schedule May Vary, Look for Emails or Check this Website)

BOARD OF DIRECTORS MEETINGS